by Pat Fleming
Comments are off 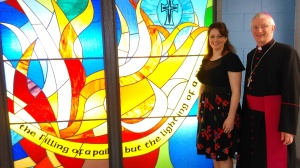 Monday 9th may saw the official opening of our wonderful new Centenary Building. The day commenced with a moving ceremony in the school gym which featured performances of song, poetry and dance from students. Sr Bernadette, Chairperson of the Board of Management welcomed all and pointed out the significance of the occasion. She took time, in particular, to thank Mr John O’Roarke as principal for his leadership and vision in seeing this great project through.

The crowd was also addressed by Marie Griffin, CEO of CEIST, who spoke of the wonderful myriad of recent achievements of Mounthawk in the areas of drama, athletics and Mathematics in which disciplines we have won regional and national awards. She spoke of how proud CEIST are of the achievements of its largest school.

Mr Jimmy Deenihan, former Minister, spoke of his special connection with the school and with Moyderwell. He praised the school’s determination and drive to build the building at a time when money was extremely scarce. It was the fact that the school community had already done so much to fund the project that helped most to gain approval from the DES.

Bisop Ray Brown led the liturgical element of the ceremony assisted by Fr Patsy. He spoke of the significance of our Mercy tradition at this time and especially in the Year of Mercy.

A meal and entertainment followed the unveiling of the plaque at the entrance to the building. Mr John O’Roarke spoke and thanked all who had mad this day possible, especially those who had been involved in fundraising. He thanked the builders and design team for an excellent space and for their hard work. he thanked all the teaching staff who had contributed to the day.