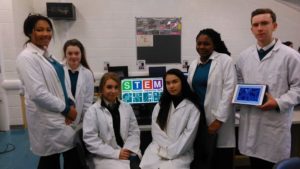 Mercy Mounthawk had four projects at the finals.

An investigation into the teaching and learning of Junior Certificate Physics and the promotion of STEM to female students.

This project won 3rd in the senior catagory…Well done to Olivia and Tamilla!!!

See them in action here. 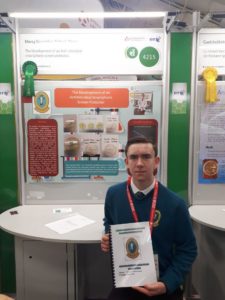 The knowledge young adults have on homelessness today.

The Development of an Anti-microbial smartphone screen protector.

Robin Porter is developing an antibacterial paint that can be applied to a phone case to reduce bacteria growing on smart screens.

Robin won a Highly Commended Award for this project. 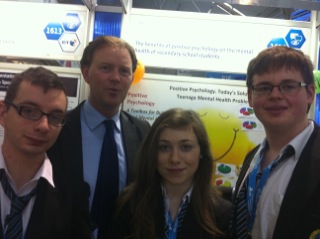 Below is an account of the experience of the 2012 Young Scientist team by Luke Stafford-Lacey:

I completed a course in Positive Psychology last year and I was so impressed with its effect upon me that I wanted to note its effects on other students. Daniel Carmody, Aisling Shalvey and I decided to form a team to complete a project for the BT Young Scientist competition in Dublin.  We had a lot of work to do as we had to gather data on students before they completed the Positive Psychology course and after it was finished. We also had to put together surveys in order to elicit which were the most effective interventions from the course. Our project was based on the benefits positive psychology has on the mental health and academic performance of students.

To be honest, I never thought of myself as a young scientist as I am not very scientific by nature. However, our project was to be placed in the Behavioral Science section and that was much more suited to my more creative and sensitive nature.  Our Christmas break was taken up with analyzing data and learning how to do a statistical analysis of our findings. It certainly took us out of our comfort zone which, according to the positive psychology pioneers, is great for the brain.

Armed with our project, a very impressive poster and a plant masquerading as a gratitude tree, we travelled to Dublin by train. The relief at having finally finished this gargantuan task was unreal.  Our journey into the world of science began once we entered the RDS and put up our stand.  Within minutes, a man dressed in a red coat arrived with a note telling us that the judge was coming in the afternoon.  Phew. Time to prepare. This was the start of a hectic week where I really had to work on my public persona.

The three of us took turns going around looking at other projects. There were some amazing projects such as a carbon monoxide invention that texted the owner if carbon monoxide levels were raised. There were also projects on teenage gambling habits, taking sports supplements and our natural deference to authority. My brain felt it was being fed at an enormous rate. A lot of information in such a short time made me feel as though my brain was short circuiting!

The judge, an elderly scholar from Trinity, came and read though our project. We were able to answer his questions but he wasn’t at all sure about the philosophy behind positive psychology. I hope he was more enlightened having spoken to us. After he left, we had plenty of media interest. We were visited by Mr. Jimmy Denihan, Mr. Arthur Spring and Mr. Michael Healy Rae who were all impressed with our work. Arthur Spring commented that positive psychology was what was needed in the Dail what with all the negative doom and gloom talk on the economy.

I learned a lot about myself from my time in Dublin. I had to cope with talking to a lot of people about our work and I enjoyed being in the public eye. It was very exciting having radio stations interviewing us.  I also felt that the information on positive psychology needed to be shared with as many people as possible so I was happy to do this. Teenagers need coping mechanisms especially with all this negative talk and lack of prospects for young people.

Our project was highly recommended by the judges and we were pleased with this acknowledgement of our work.  The best thing about entering the young scientists will be the memory that will stay with me forever.  I would certainly recommend any student to enter this great competition. The work is worth it. The attention is top class.