Cycle Against Suicide and the Amber Flag Initiative 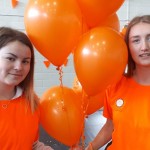 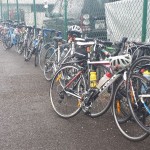 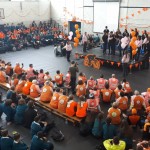 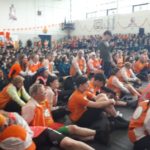 The Cycle Against Suicide is a national awareness event that strives to break down barriers around mental health issues and works to increase awareness of the supports and treatments that are available to empower those affected. With Mercy Mounthawk having participated in CAS four years previously, certain students were eager to once again brace the roads with compatriots from around Ireland and beyond.
A team of 4th and 5th years was assembled to cycle out to the Cycle Against Suicide convoy and bring them into the school in style. With clear skies opening up for the entry, cyclists were greeted with rousing cheers and colourful banners, not to mention much needed food!
Entertainment provided by the students of Mercy Mounthawk filled the sports hall as the choral, YSI and musical groups all contributed to an enjoyable afternoon. The communal spirit of the school was on great display as students from all year groups played their parts to support this cause both on and off the road.

Finally the Mounthawk group led the Cycle against Suicide out of Tralee and on to the next stage of their trip across the country. An insightful day finished with all those involved feeling fulfilled, enlightened, not to mention tired!

See our TY produced video of the day here 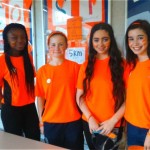 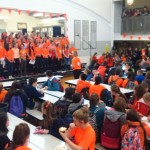 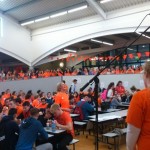 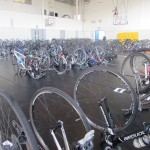 Mercy Mounthawk is proud to be selected as a host for the Cycle Against Suicide for 2015.  As part of the preparation for that event we held a 5k run/walk with Jim Breen himself as our special guest. The whole day was a tremendous success seeing the whole school turning orange! There was even a film crew from RTE to chronicle the build up.  Great credit must go the the organising committee but especially Ms Bernie O’Shea and 6th year students Sean Dowling and Gavin Connolly for a day that we will remember for a very long time.

The central message for the Cycle Against Suicide is “It’s OK not to feel OK and it’s absolutely OK to ask for help.  For more information see http://www.cycleagainstsuicide.com/ 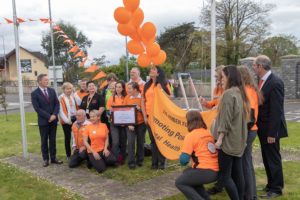 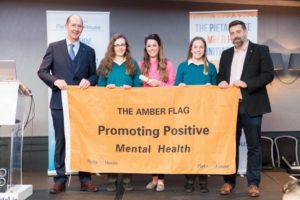 The Amber Flag was presented to Mercy Secondary School Mounthawk recognising our individual efforts to create a healthy, inclusive school environment that supports mental wellbeing. The Pieta House Amber Flag initiative, now in its 4th year, recognises the individual efforts of schools, companies, and groups to create healthy, inclusive environments that support mental wellbeing. All groups receiving the Pieta House Amber Flag qualified for the award by hosting a mental health awareness event, a fundraiser, and a mental health initiative.

The programme encourages teamwork and student contributions, and works with school guidance counsellors to include a peer-support element.What the Amber Flag will do is acknowledge these efforts and unite all schools/clubs/societies/community groups in the promotion of “Positive Mental Health”.

It becomes a daily topic of conversation leading to a cultural shift where mental health becomes “The Norm” leading to the breaking down of “Stigma” that is associated with mental health, resulting in individuals seeking help sooner, when mental health issues arise. 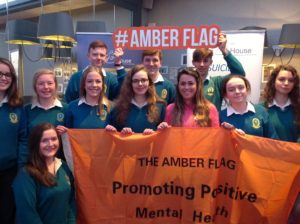 For more details on Pieta’House’s Amber Flag initiative click here.The culture shift in Mental Health can only become the norm when challenges like achieving the Amber Flag become recognised as a central programme of activity in schools/clubs and associations.